Many of us clean our clothes at home using a combination of washings machine, detergent and water. But sometimes your garments just need a bit of a refresh. That’s where Samsung’s AirDresser comes in, using air and steam to sanitize and freshen clothes placed inside.

Announced last year and resembling a tall, narrow refrigerator, the AirDresser uses a combination of air and steam to clean a few items of clothing and then get rid of things like sweat and smoke smells. 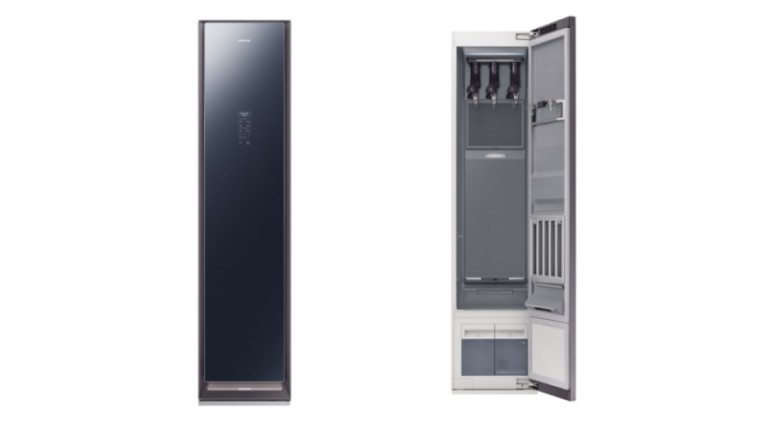 “AirDresser is Samsung’s response to consumer demand for more dynamic performance from even basic appliances, providing an easy and effective home solution to meet their needs for clean clothes that smell fresh, are germ free and look neat,” said Samsung’s Jennifer Song.

Once a garment is hung inside the unit, the user can initiate the cycle and simply wait for the system to run its course: The Jet Air and Air Hangers release powerful air to loosen and remove engrained dust, with only minimal noise and vibration, quiet enough for anywhere inside the home, including the bedroom.

Then, the JetSteam sanitizes the garments to get rid of the bacteria, viruses, and allergens. Infusing high temperature steam deep into the fabric, JetSteam is the perfect tool for routine sterilization of clothes and many other household items such as linen and soft toys.

Samsung says the AirDresser can remove 99.9% of four kinds of viruses (influenza, adenovirus, corona virus, and herpesvirus), 100% of house mites, 99% of gases that cause odor, such as those from sweat or food, and 99% of harmful substances like Perchloroethylene.

The AirDresser can also clean itself with a Self Clean feature. It doesn’t require any detergents or other products, and the dresser cleans itself pretty much the same way it cleans your clothes – by using heat, steam, and air. It will also let users know when it needs to be cleaned, once every 40 cycles.

The AirDresser features a touch-enabled LCD panel out front, has enough room inside for three jackets and three pairs of pants at once, can be run overnight without disturbing the sleeping household, and includes portable water containers for the steam so there’s no need for plumbing in.

There’s even AI – unsurprisingly, given the tech industry is obsessed with artificial intelligence these days – which promises to learn what clothes you own and suggest the best way of cleaning them. Installation doesn’t need a fixed water supply or drainage, with two portable containers at the base of the AirDresser handling that instead.

First launched in Korea in 2018, and subsequently showcased at IFA 2019, the AirDresser goes on sale around the globe from today.

You can find out more information about the new Samsung AirDresser over at Samsung at the link below, there are no details on pricing as yet.

(Photoshop Fun) From black and white to color

Scientists modified a strain of cannabis to kill cancer cells

(Photoshop Fun) From black and white to color

Scientists modified a strain of cannabis to kill cancer cells

US Navy Just Got A Patent For A Anti-Gravity “Flying Saucer”...

ABOUT US
Newspaper is your news, entertainment, music fashion website. We provide you with the latest breaking news and videos straight from the entertainment industry.
Contact us: contact@yoursite.com
FOLLOW US
© Newspaper WordPress Theme by TagDiv
MORE STORIES